"No knowledge is to be found without seeking, no tranquility without travail, no happiness except through tribulation. Every seeker has, at one time or another, to pass through a conflict of duties, a heart-churning."

Bhagavad Gita is the manifestation of the entire Hindu religion in one book, and the quintessential translation done by none other than the Mahatma, captures the text in its sense and spirit.

This unique and very special edition of Bhagavad Gita has been compiled and presented as a commemoration of India's Prime Minister Shri Narendra Modi's gift to the then President of the United States of America, Mr Barack Obama in 2014 during his US visit. 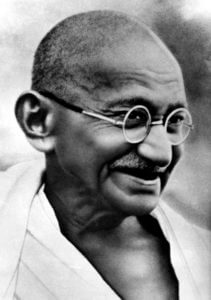 Mohandas Karamchand Gandhi (2 October 1869 – 30 January 1948) was the leader of the Indian independence movement in British-ruled India. Employing nonviolent civil disobedience, Gandhi led India to independence and inspired movements for civil rights and freedom across the world. The honorific Mahatma (Sanskrit: “high-souled”, “venerable”)—applied to him first in 1914 in South Africa—is now used worldwide. In India, he is also called Bapu (Gujarati: endearment for “father”) and Gandhiji. He is unofficially called the Father of the Nation.

Assuming leadership of the Indian National Congress in 1921, Gandhiji led nationwide campaigns for easing poverty, expanding women’s rights, building religious and ethnic amity, ending untouchability, but above all for achieving Swaraj or self-rule.

He attempted to practise nonviolence and truth in all situations, and advocated that others do the same. He lived modestly in a self-sufficient residential community and wore the traditional Indian dhoti and shawl, woven with yarn hand-spun on a charkha. He ate simple vegetarian food, and also undertook long fasts as a means of both self-purification and social protest.

Mahatma Gandhi’s birthday, 2 October, is commemorated in India as Gandhi Jayanti, a national holiday, and worldwide as the International Day of Nonviolence.